An extended version of this blog was published by cyclist.co.uk

If you have ever had the feeling that it is becoming harder to rise up the Strava leaderboards and that KOMs are ever more elusive, you are right. I took a snapshot of the top 1000 entries for the Tour de Richmond Park segment in April 2019 and compared it with the leaderboard from February 2017 that I used for an earlier series of blogs.

The current rankings are led by a team of Onyx RT riders, who rode as a group at 6:02am on 25 July 2018, beating Rob Sharland’s solo effort by 6 seconds, with a time of 13:51. Some consider that targeting a KOM by riding as a team time trial is a kind of cheating. Having said that, many riders have achieved their best laps around Richmond Park while riding in the popular Saturday morning and Wednesday evening chain gang rides. In fact, if the Onyx guys had checked my blogs on the optimal wind direction and weather conditions, and chosen a warm evening with a moderate Easterly wind, they would have probably gone faster.

Survival of the fittest

The Darwinian nature of Strava leaderboards ensures that the slowest times are continually culled. Over the two year gap, the average time of the top 1000 riders improved by 35 seconds, which equates to an increase in speed of about 1.6% per annum. In 2017, a time of 17:40 was good enough to reach the top 1000. You now need to complete the rolling 10.8km course in less than 17:07, averaging over 37.8kph, to achieve the same ranking. The rider currently ranked 1000th would have been 503rd on the 2017 leaderboard, making the turnover about 50%. 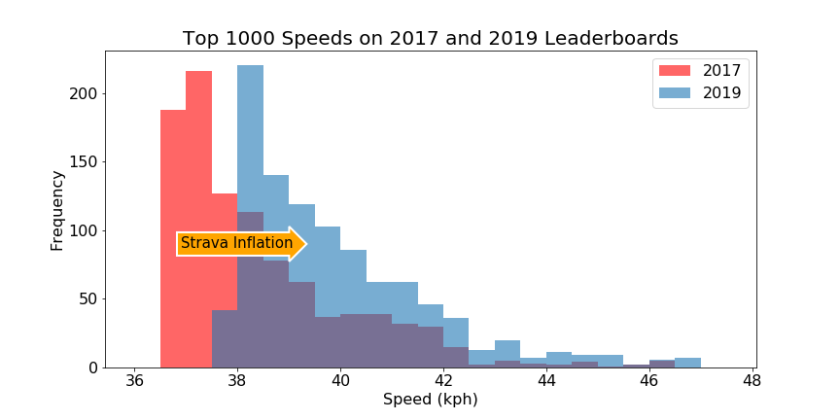 Strava inflation produces a right shift in the speeds at which riders complete the segment. Rider speeds exhibit “long tailed” distributions, with just a few riders producing phenomenal performances: although many people can hold an average of 38kph, it remains very hard to complete this segment at over 42kph.

A total of 409 names dropped off the bottom of the 2017 leaderboard, to be replaced by new faster riders. Some of these quicker times were set by cyclists who had improved enough to rise up the leaderboard into the top 1000, while others were new riders who had joined Strava or not previously done a lap of Richmond Park.

Of the 591 riders who appeared on both leaderboards, 229 improved their times by an average of 53 seconds. These included about 90 riders who would have dropped out of the top 1000, had they not registered faster times.

Getting faster without doing anything

One curious anomaly arose from the analysis: 32 efforts appearing on the 2019 leaderboard were recorded on dates that should have shown up on the 2017 leaderboard. Nine of these appeared to be old rides uploaded to Strava at a later date, but that left 23 efforts showing faster times in 2019 than 2017 for exactly the same segments completed by the same cyclists on the same rides.

Summer is the time to go faster

Strava leaderboards were never designed to rank pure solo TT efforts. Although it is possible to filter by sex, age, weight and date, it remains hard to distinguish between team versus solo efforts, road versus TT bikes and weather conditions. The nature of records is that they are there to be broken, so the top times will always get faster. The evidence from this analysis suggests that there are more faster cyclists around today than two years ago.

As the weather warms up, perhaps you can pick a quiet time to move up the leaderboard on your favourite segment, while showing courtesy to other road users and respecting the legal speed limit.